Location and how to access Pian Upe Wildlife Reserve

Pian Upe covers an area of about 2,043 square Kilometres to the north of Mount Elgon, making it the second largest protected area after Murchison falls national park and the largest wildlife reserve in Uganda with the best picturesque points. Pian Upe is located in the north-eastern semi-arid of Uganda with a total of about nine north-eastern Uganda districts either closely or partly or entirely covered by the stretch of the game reserve, these district including; Nakapiripirit, Amudat, Moroto, Katakwi, Napak, Kween, Kumi, Bukedea, and Bulambuli.

Pian Upe is easily accessed from the south of Chepsikunya trading Centre through Mbale city as you drive from Kampala city or north of Namalu trading centre for visitors travelling from Moroto city. The reserve can be accessing from Kampala city which is about 8 hours’ road drive through Mbale town and Soroti town to finally Nakapiripirit district where the reserve is found. From Mbale city, it is 5 hours road drive, about 2-3 hours road drive from Sipi falls in Kapchorwa district on the edge of Mount Elgon, and from Pian Upe wildlife reserve is 5 hours’ drive towards Kidepo national park. The closest operational airstrip is located in Amudat.

Years before the reserve was gazetted as a wildlife reserve, the area was a famous battleground for two of Karamojong’s pastoral groups comprised of those from the north-eastern Uganda and the Pokot who are from Kenya, right up into Matheniko & Bokora Wildlife Reserve and into Kidepo Valley National Park, the main road leading into the reserve forms the boundary where both tribes intersect to raid one another during ruthless cattle rustling. However, Peace has since returned to this region, and tourism activities have been improved.

In the 1958, the southern part of Pian Upe wildlife reserve was gazetted as the Debasien Animal sanctuary even when the boundaries of the wildlife reserve were still being threatened when the government established a project for an agricultural produce in the south of the Girik River. This escalated threats on the reserve resources, hard-pressed the state to expand the area northward and rename it Pian Upe Game Reserve in 1964. Fortunately, the Government of Uganda has recently expressed interests in upgrading the Pian Upe Game Reserve to National Park position, and efforts introduce and restore wildlife numbers is already in the process, as well as plans to open up more areas for tourism development.

Pian upe derives its name from its community where “Pian” refers to a clan among the Karamajong people of north-eastern Uganda. They are predominantly pastoralists and live a very traditional lifestyle, only being cantered around their cattle. This group is mainly found in Nakapiripirit district close to the Pian Upe Wildlife Reserve Headquarters. “Pian” actually means “calm hearted people” While “Upe” refers to a Kalenjin speaking pastoralist community of the Karamongs who are said to have originated from the Pokot tribe in Kenya, but now settled close to the wildlife reserve in Amudat district. “Upe” means “enemy”, when both words are combined, you get a word “friendly enemies”

The best time to visit Pian Upe Wildlife Reserve is between the months of November to March which are the drier months of the year. It is also during this time that the reserve management also carries out controlled bush burning to keep the grasses short, leaving the vegetation dry and it becomes easier to view the animals around the major water sources when they gather for a drink. Girik River located in the southern part of the reserve is a source of water for the animals living in this semi-arid region.

Although the rains in this part of the country are very unpredictable, Pian Upe wildlife reserve receives very heavy rains during between the months of April to October and during these months, the trails for game drives and even the main routes get flooded with water making it almost impossible, additionally the grasses are extremely grown making game viewing difficult. Visitors interested in visiting Pian Upe wildlife reserve are advised to spend at least two days in the reserve to get a decent taste of what the wildlife reserve is made of. I recommend booking your trip to Pian Upe through Achieve Global Safaris using a 4WD Vehicle; Land Cruiser most preferably.

Given that this part of the country is so remote and semi-raid, Pian Upe wildlife reserve is one of the most fascinating and interesting distinct wildlands dominated by wooden savannah plains surrounded by mountains and also cut between rock-strewn ridges and kopjes, plateau, and seasonal rivers. Pian Upe is dominated by short trees and shrubs, thatching grass, lemon grasses, bristle species, beard grasses to mention a few. The reserve’s plains are draped with red acacia, shrubs like the butterfly pea, desert date and bush willows.

Pian Upe Wildlife Reserve is one of the most distinguished places for harbouring quite a number of rare animals found nowhere else in Uganda, including a healthy population of Cheetahs and Uganda’s only remaining population of Roan Antelopes. Seeing the Cheetah measures up to 80% chances thus Pian Upe wildlife reserve is the best place to see world’s fastest mammal.

Other predators found in the reserve include; the wildcats, Jackals, Spotted Hyenas, Civets, Serval Cats, the mysterious Leopards and prides of Lions are reported to periodically travel between the nearby Amudat Wildlife Conservation Area and Pian Upe Wildlife Reserve. The reserve is also home to large herds of ungulates including the Common Eland, a small population of Zebra, Hartebeests, Günther’s Dik Dik, the popular Oribis, and the Impalas which were recently relocated here from Lake Mburo National Park. Cape buffalo, the Uganda Kob, Waterbuck, Blue and Common Duiker, Klipspringers and the Bohor and Mountain Reedbuck also enjoy the homely Pian Upe. Some of the rare animals in the reserve including; the Ververt and Patas Monkeys, the African Hare, Crested Porcupine, , Aardvarks, , Rock Hyrax, Four-toed HedgeHogs, and the Olive Baboons. Pian Upe is home to a variety of reptiles including; the common Agama, Geckos, Venomous puff adders, rock pythons, Savannah monitors, Chameleons and crocodiles that can be found in River Girik. The reserve is still untouched with low numbers of visitors, this guarantees all wildlife sightings in a private, and intimate experience, dismissing crowds that can be seen in other national park. Morning and evening game drives are the best time to see most of the animals with the dazzling sunsets and sunrises for example every morning the sun comes out behind the mountains and descends over the horizon in some of the most fascinating sunsets.

Most of the animals in Pian Upe had become extinct during the era of insurgencies, however; the Uganda Wildlife Authority already has plans of reintroducing most of the animal species to re-active the reserve for tourism development.

Pian Upe wildlife reserve is one of the best destinations in Uganda for birdwatching experience given a variety of different bird species found the reserve. The reserve’s ecosystem has attracted unique bird species making the reserve a birding destination. Some of the bird found include; the rare Ostriches which are easily seen while in this reserve, the Karamoja apalis which is endemic to north-eastern part of Uganda. Other bird species to be found while in Pain Upe wildlife reserve include; Superb sterlings, Green bitta, Secretary bird, Abyssinian ground hornbill, the rare shoebill stock and the Fox weaver bird that can be seen in the park’s stretch of land. 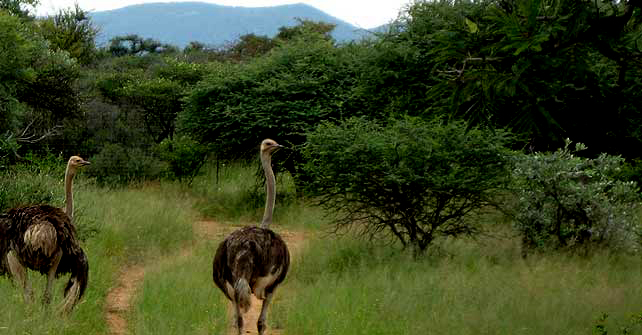 Pian Upe is located in the Karamoja region where we find the Karamojong people who are similar to the Masai of Kenya and Tanzania. These people have a rich culture and tradition that is exciting to experience even though they are known to be hostile in the early days of their settlement. The Karamojongs are best known for their pastoral practises. The cultural visit to one of the local Karamojong community near the reserve will offer you an exciting cultural experience on a rare cultural music, dance and drama performance by the locals most especially the famous Edonga dance.

Driving through Pian Upe introduces you to an endless flow of Savannah plains, dotted with Acacias and Sausage trees as well as rocky ridges embraced three mountains including; Mount Kadam, Mount Elgon and Mount Napak. When you look beyond the horizon, you will see these mountains stretching high above the sky. These mountains allow hiking opportunities.

Hiking to the Napedet cave is one of the best experiences of hiking while at Pian Upe. This hike tests one’s physical fitness levels, working on health levels and granting awesome views of the reserve’s ranges. Napedet cave is a popular ancient recreational place for the first inhabitants of this area who would gather to engage in painting before the area was gazetted. Visitors can be able to see odd paintings of Roan Antelope, Hartebeests, Baboons, as well as Giraffes which once roamed the reserve’s open plains.

Where to stay while in Pian Upe Wildlife reserve

Pian Upe Wildlife reserve is still underdeveloped in terms of accommodation. However, there are affordable accommodations including;

Karamoja Overland Camp is a mid-range accommodation where you can sleep in safari tented camp. The camp is located just below the Uganda Wildlife Authority’s facilities. The safari tents are self-contained featuring en-suite facilities like showers, electricity, and bedding facilities. Accommodation prices range from $150 per tent per night.

The Uganda Wildlife Authority Bandas are the most popular accommodation located at the Headquarters. There are 4 Bandas named after some of the animals found in the reserve. 3 of these Bandas are self-contained with big beds and facilities like a bathroom with a shower and sink flowing with cold and lukewarm water.

Its only one Banda that is not self-contained with an outside washroom and toilet. However, all the Bandas are lit by electricity for light in the night and charging spots for your gadgets can be found in each of the three self-contained Bandas as well as at the office. It is advisable that visitors avoid wondering around the park during the night as it’s known that a resident Leopard spends the night at the park headquarters. Meals are served here and a mini-bar is available for drinks at an extra cost.

For those who are more adventurous and would like to listen more closely to the sounds of the African wild, camping is a fine option. It is better to travel with your own tents however there are tents which can be hired and pitched at the headquarters.

Wilderness Camping in the reserve is at UGX 15,000 per night. To hire singles tent is 40,000 Uganda shillings, a double tent goes for UGX 55,000. Given that the prices for accommodation change from time to time and ingredients for the meals must be purchased in advance, it is advisable to contact Uganda Wildlife Authority to place an order prior to your travel.